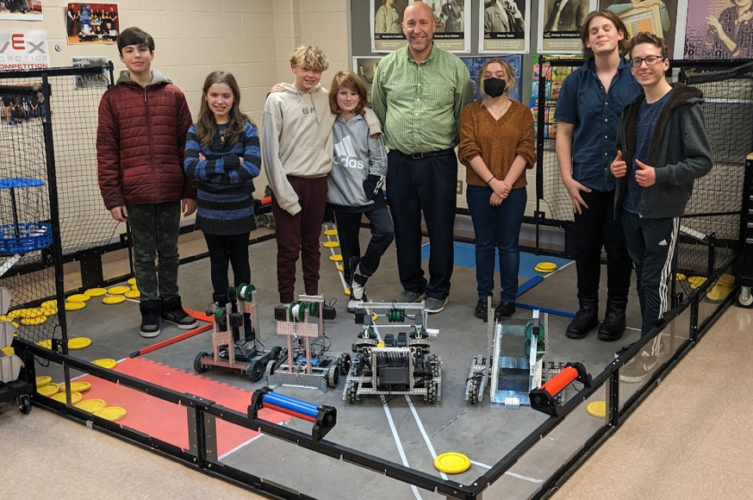 Sheffield – Since 2008, Mount Everett Regional School students have learned about technology through the school’s robotics club. This year’s club consists of 17 middle and high school students who have come together to design and build robots and participate in competitions against other school clubs in New England.

When Berkshire Edge visited the club on Wednesday, January 18, the students, along with club advisor Chris Thompson, were all busy assembling their robots to compete in the VEX Spin Up competition at Middletown High School in Middletown, Conn. on Saturday, January 28. VEX Robotics and a national program that includes competitions and programs managed by the Robotic Education and Competition Foundation.

“We have very busy kids,” Thompson said as some of the students walked around the clubhouse and installed parts for their robots. “Robotics combines computer science and mechanical engineering. These are all things that can be good in the future when it comes to student careers. But beyond that, critical thinking skills and teamwork all give kids the ability to express themselves creatively with their robots,” Thompson said. robotics is about more than just learning about technology. “Putting robots together also builds confidence,” Thompson said. “There’s more to robotics than just technical skills. There’s also a lot more to people. I think throughout their career in this club, the students love to grow.” like people. But the whole idea of ​​having robots competing is to try to capture the interest, the passion, and the excitement that professional athletes get in our culture, but bring it into the scientific arena.”

For their upcoming competition, the 17 team members will be divided into five teams, each team in charge of a different robot. Each robot will be competing against other robots in a 12-foot by 12-foot court, where the robots will carry and shoot discs into baskets to score points. “It’s like frisbee golf,” Thompson said.

Students enrolled in the group learned a number of skills, including freshman Ben Vella, 14. “I’ve learned a lot about technical skills and especially problem solving,” Ben said. “We’ve had a few problems here and there with our robots. However, we have been able to overcome these challenges and solve them by finding solutions.”

Ben said he plans to work in the arts in the future. Ben said, “I’m looking forward to being on this team even after my senior year.

“It’s hard to make a robot,” freshman Kai Hohlstein, 14, said. But if you have a good team, it’s a lot of fun. I have learned a lot about the importance of taking action when it comes to technology to be successful. It’s a different approach than I’m used to, but it’s fun. “

Student Sophie Delmasto, 15, said she has learned a lot about time management as part of the club. “It’s all a commitment of time,” Sophie said. “But it’s also about loving engineering. When I was young, I loved playing with Legos. It’s great to play with big Legos. “