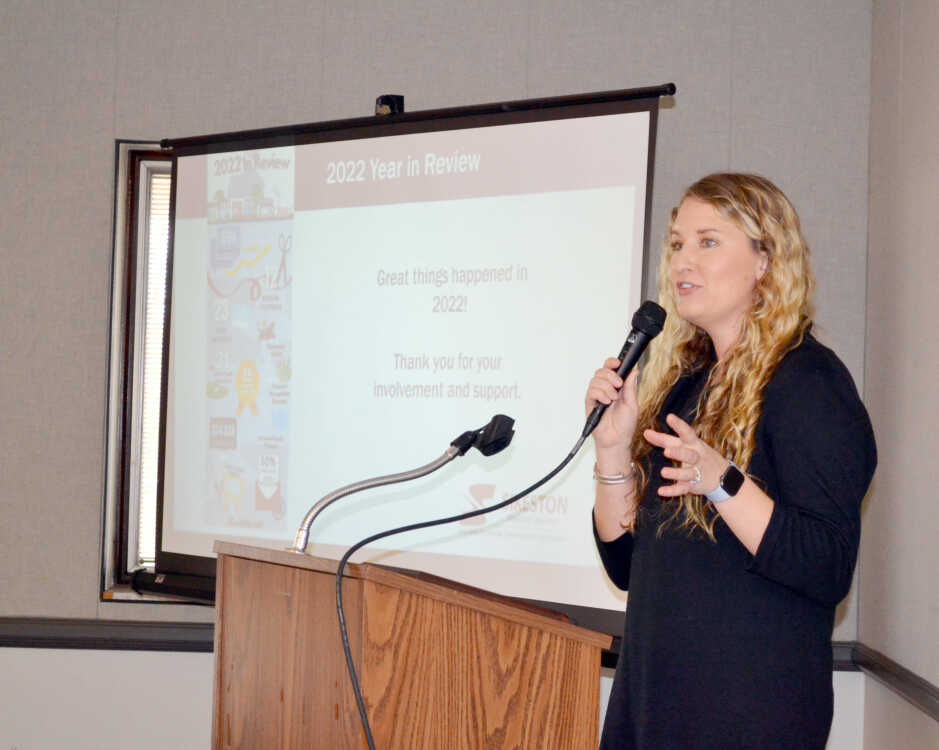 Taylor Deere, member and director of programs for the Sikeston Regional Chamber and Area Economic Development Corp., presents a review of the past year at the Chamber’s monthly luncheon Thursday, Jan. 19, 2023, at the Clinton Building in Sikeston. (Leonna Heuring / Democrat Representative)

The format for announcing the Sikeston Jaycee Bootheel Rodeo will be a little different this year.

Although the announcement will remain in partnership with the Sikeston Region Chamber and will take place in March, it will be held in the evening and allow public attendance.

Taylor Deere, a member and program director for the Chamber, highlighted the change at the Chamber’s luncheon on Thursday, Jan. 19 at the Clinton Building in Sikeston.

“This is my most exciting announcement,” Deere said Thursday. “I love how the Jaycees are always willing to try new things.”

For years, the Jaycees have announced the upcoming rodeo entertainment during the Chamber members’ luncheon in March.

“Probably one of our biggest deals is the partnership with them for promoting rodeo entertainment,” Deere said. “They’re going to move that to an evening event. So, that’s going to take the place of our March luncheon. It’s going to be in conjunction with the Chamber.”

On Friday, March 24, the doors will be open to Chamber members only at 4:30 pm with a special social hour. Dinner and program will begin at 6:30 pm followed by live music.

“Hopefully, this is a new, exciting way to start the rodeo season,” Deere said. “You’ll get your exciting announcement, and it will be followed by live music, and I think it’s going to be a really fun event. It’s going to be open to the public after the Chamber mixer hour.”

Some of the smaller changes the Chamber is making in 2023, according to Deere, include: the return of the mixer during the lunch break months, which would be February, April, June, August, October and December; and blog extension.

Deere also said that 2022 was a surprise to the Chamber.

In other remarks at the Chamber luncheon, Marcie Lawson, President/CEO of the Chamber and Area Economic Development, Corp., provided an economic development update. He said construction at Carlisle Construction is still ongoing. It has more than 490,000-square meters of space under one roof.

“They’ve invested over $100 million in this building and going into Sikeston,” Lawson said. “This is great for our community.”

Lawson said the new construction company is bringing 100 new jobs to Sikeston, and they are close to hiring. He said Carlisle aims to have everything done by April.

Kathy Medley, vice president of the Chamber and director of the Sikeston Convention and Visitors Bureau, explained to the crowd what was to come.

The inaugural Sikeston Hot Air Balloon Festival is set for June 16-18 at the Sikeston Jaycee Bootheel Rodeo. Currently, there are 57 registered sellers. Vendor fees are $35 per site on Fridays and Saturdays. Help is also available.

The Tourism Advisory Board will present the Sikeston Tourism and Hospitality Award to this year’s winner at a luncheon on March 2 at Lambert’s Cafe. The speaker is Stephen Fouts, director of the Missouri Division of Tourism. The award will recognize a business, organization or individual who has made a significant contribution to the tourism and hospitality industry.